Portrait Drawings
. . .  Before and After

There's an old saying that "every picture tells a story".  In the portrait drawings of my model, Moe Tellier, this saying could not be more pertinent.

Moe first sat for me in 2011.   I will simply have to say he was by far one of my favorite models, not only for his ability to comfortably sit still, but also for his inspiring inner spirit. His infectious spirit became more clear to me the more I spent time with him.

Like the rest of us, there were things in his past which Moe wanted to overcome.  In my opinion, he was one of those few who very successfully did just that.  I think he considered himself "a work in progress" and he was therefore constantly working to better himself.

After the first portrait was done, Moe of course, saw his likeness, but he was not happy with the inner soul he saw in the drawing.  The eyes, in particular, reminded him too much of his late father, which opened some chapters in his life he wished to leave behind.

Both portrait drawings look just like him.  But if you look closely, I think you'll see a more confident person in the second drawing below. 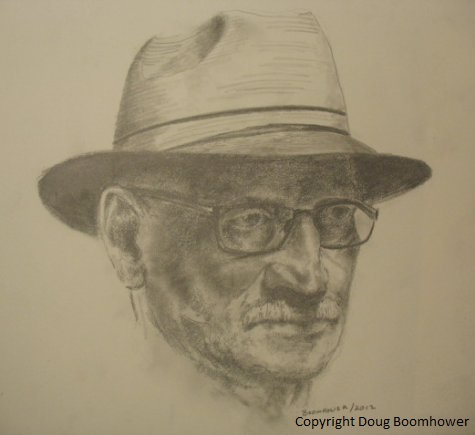 Moe continued his spiritual and disciplined journey of self help ... and then a year and a half later we did the second of two portrait drawings.   This time, you'll see he's wearing glasses and a hat.

Now of course, glasses and a hat are not going to give you confidence, but close observation will reveal a calmer and more confident man.

Drawing Maurice Tellier has been a high point of my portrait career to date.  We shared our personal life experiences with one another, and in doing so we learned from each other.

As a sitter for my portrait drawings, Moe gave the following personal account of his experience:

Amazing! Thoughtful! Frightening! That is what went through my head when Doug showed me this for the first time. I was amazed at who I saw, and immediately thought I was looking at my Dad, and was frightened by this.

How could you revive a man dead and gone? Is this who I was? Do I portray sadness and melancholy, or is it thoughtful and pensive? My father was not a happy man! Am I not content?  My life is exposed by the artist's pencil. I am confused.  I saw this all at a glance, and told Doug that I didn't want a print of it! How lucky to see who I was through the eyes and hands of another.

Over a period of time, I reflected on this, and came to the realization that genetics is irreversible and beyond my control. How could I fear this or in some foolish way, think I was responsible. I have the genes of both my parents, and for that I am grateful!  I had no idea of the significance of the person Doug had captured until Portrait #2 was completed.

A year later! Once again Doug has transposed who I am at this point in my life. It's only a year, but I am extremely comfortable with who I am, and extremely pleased with what I see.

I feel different, and the incomparable Doug is showing me who I am! Only a true artist could capture this subtle yet positive change.  Now I know who and where I was when the first portrait was put to paper!  I can comfortably look at both great photos of the original, and quietly reflect on so much history revealed.

Thank you Doug, for teaching me about myself, with your uncanny artistry!
You reach and touch the heart of your models!

Click here for more on portrait drawings, or return to home page.